Online news sources typically report looking through a certain lens or point of view. It’s important to spot bias in your news source because if there’s bias, there’s likely going to be a few exaggerated facts and misleading rhetoric used as well.

Political news is a great example of how words are rhetorically designed by the author to be understood in a particular way by the reader. Drawing from the various points of view that politics covers, there are three main “lenses” or points of view that flood the media. Conservative, liberal, and mainstream are three lenses that are common for online news sources.

My first observation after consulting example sources and articles from each lens was that the conservative and liberal lens likes to target its so-called “enemy.”

Conservative news sources such as the Geller Report and The Blaze featured a lot of content bashing Hillary Clinton and Muslims. This image was captured from the Geller Report’s homepage menu: 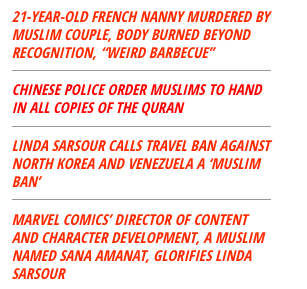 “Muslim Immigration” is actually the source’s most popular category:

When I first arrived on the the Geller Report’s home page, an advertisement popped up at the bottom of the screen: 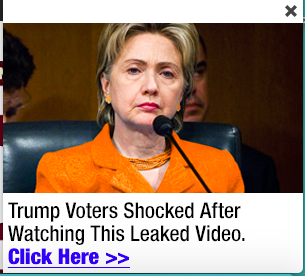 The link took me away from the Geller Report’s website, and took me to a website dedicated for bashing Hillary Clinton: 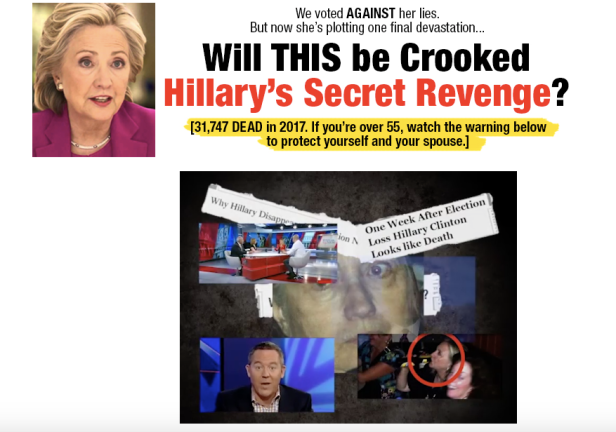 The Blaze also featured an article about Clinton on their homepage under the “Stories That Matter Most” section. The article was third on the list:

The story takes another stab at Clinton for the Benghazi attack in 2012 after she tweeted about Trump’s action towards Hurricane Maria.

Content on Hilary Clinton and Muslim immigration did not appear from sources looking through different lenses. On the liberal side, Trump is everywhere in sight. Pictures of Trump are littered on OccupyDemocrats.com:

And again on RawStory.com. His picture appears once, and his name is mentioned twice in the titles. Also, if you look at the top menu, there is an entire section dedicated to Trump.

There’s definitely an “emery” theme displayed within the sources looking through either the lens of conservative or liberal. On the other hand, the mainstream news sources cover politics as well, but most of the front page stories are about the recent hurricanes such as the NY Times:

Or about a variety of topics such as USA Today:

After reading laterally about these sources, it appears that the mainstream news outlets are the most reliable when it comes to relaying facts and information. These sites use the best sources and provide the most context information in comparison to highly conservative and highly liberal sources. Mainstream lenses also use more links and cite more sources along with their claims compared to the other two lenses.

The founder and publisher of the Geller Report certainly does not hold a great rapport, and neither does Occupy Democrats:

While mainstream media proves itself most credible after reading laterally:

This says a lot about how we currently generate and gather news in today’s society. Many young readers have their news delivered through social media, which is where many of these one-lens perspective sources share their articles. I personally know someone who shares things from Occupy Democrats like it’s a sacred script. Readers: look for clues of bias in your news sources! It’s always beneficial to see through multiple lenses and perspectives in order to get the best understanding about a topic.

One thought on “Dr. Suess Warned Us About This”